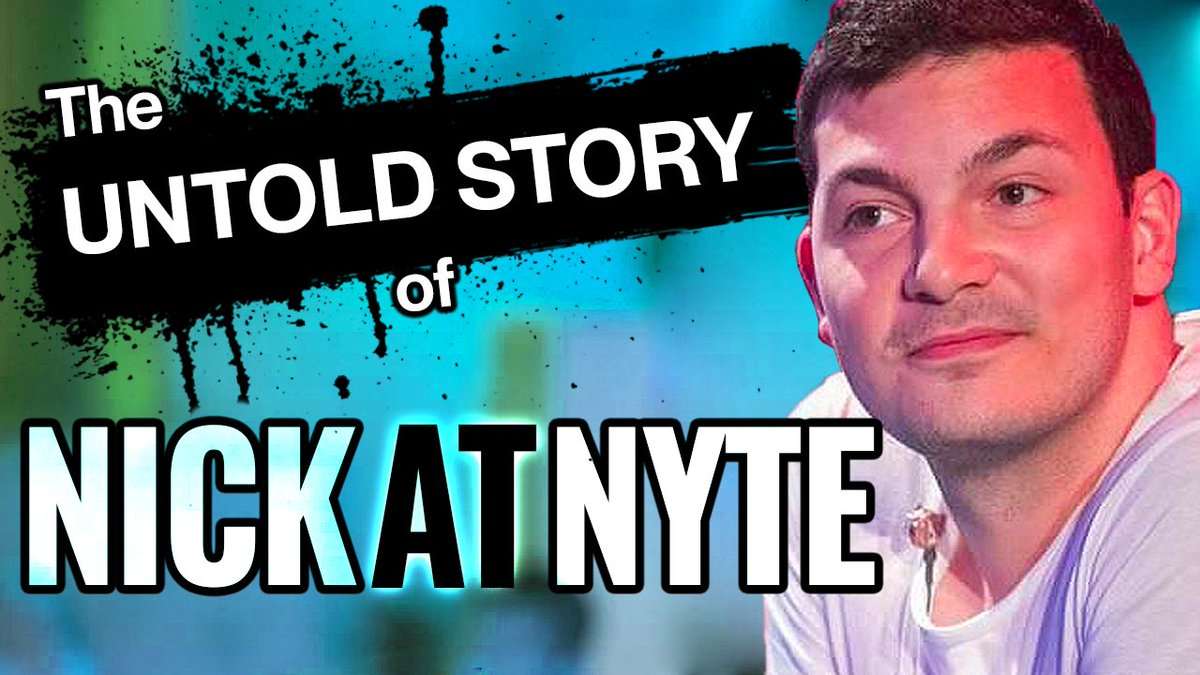 nickatnyte, a famous YouTuber, tells the story of his rise, fall, and redemption in an exclusive interview with Chat with Ash.

Nick Neri, better known as nickatnyte, talks about his struggle with depression in an interview with Chat with Ash (video at the bottom of this page). nickatnyte has been a YouTuber for more than eight years. He has more than 2.5 million subscribers, and during his peak, his videos averaged well over a million views each. He is well-known and loved by the gaming community.

The 32-year-old Nick lived in Illinois most of his life. He comes from a big family and is the oldest of four children and the third oldest of his 27 cousins on both sides. Nickatnyte grew up in an all-Italian, Roman Catholic upper-middle-class family.

He went to California for three years for school, went to Arizona for one year, and then to Chicago. He wanted to be an audio engineer or a musician. Always an achiever and creative performer, Nickatnyte started with piano lessons in the second grade and was doing recitals by the third grade. He also took part in soccer and other sports.

nickatnyte worked for an Apple store before his YouTube career took off. He never really had any money and was living pay-check to pay-check. He started his first YouTube channel, nytefox0, in 2008/2009, which was piano tutorials and gaming. One of the earlier videos got 100k (now 300k) views on a piano tutorial and grew from there.

In 2013, YouTube became a full-time thing for Nick. He met his wife, Kelly, eight months before starting YouTube. He suddenly went from zero to six figures and a millionaire lifestyle. People started recognizing him in stores, and he got all expenses paid for business trips around the world.

His goal never was to be internet famous. 2015 to 2017 blurred passed him. It was a mental whirlwind because, at that time, social media was still sort of new, and the world was still figuring out how to use and monitor it.

“I am an INTJ. I don’t follow or abide by those acronyms, but I’m more introverted. Most of the time, I’ve been able to express myself through my creative endeavors.” – nickatnyte

Nick and Kelly got married in 2017. The good-looking celebrity couple was happy. Kelly was involved in Nick’s career and helped out in many areas. They were a perfect power couple.

nickatnyte grew up in the upper-middle class. He tried to mimic that lifestyle, creating a million-dollar single-family house in a nice area with cars and all that goes with it. He thought it would make him happy, but he was wrong.

Nick talks about his downward spiral with depression, substance use, and self-harm in the video. And even though the discussion with Ash is very raw and deep, it is not hard to see why he is so popular among his fans. His charismatic personality shines through the highly personal and challenging topic about his emotional and mental struggles, with an engaging smile here and there.

“I was talking to people, but a lot of it is surface-level internet conversation. So, I wasn’t getting anything enriching or profound out of life and thought I just needed to clean up my act. I also started having relationship struggles with Kelly.” – Nick

Nick and Kelly got amicably separated late last year, yet they are still friends. They did not have any children, but they have some beautiful dogs.

Start of the road trip is successful 🚗💨 pic.twitter.com/0bEedDVt7r

Rehab: Start of the Healing Process

“Yeah, rehab helped a lot. It mainly was the decision to want to go to rehab. I don’t even know if I was technically at my rock bottom.” – nickatnyte

Checking into rehab is one of the best things Nick did to help himself and recommends it to anyone going through depression, drug use, or self-harm.  He needed to learn how to be himself again. For him, it was a fresh start to a new life chapter. He recommends daily yoga, gratitude, stretching, or movement practice to get the negative energy out.

Started going to the gym again, finally, it does feel good though.😅I’m saving this pic of a reminder of how I looked in March 2022 to check on later.
Kept my shirt on to save you from seeing my belly though. #noabs

With his new take on life and his priorities set, Nick takes things one day at a time. He talks about his favorite musicians, shows, hobbies, and interests. His love for music, gardening, and cooking and how he wants to incorporate them into his plans.

First time streaming Piano on YouTube Live https://t.co/YkhHvu8Lc2 via @YouTube let me know if you’d watch another or if I should quit jk

If you or someone you love suffers from depression, drug/alcohol abuse, or self-harm, get help as soon as possible.

THIS VIDEO CONTAINS CONTENT THAT IS NOT SUITABLE FOR CHILDREN, INCLUDING DISCUSSIONS OF SUBSTANCE ABUSE, SELF-HARM, AND MENTAL HEALTH. VIEWER DISCRETION IS ADVISED.