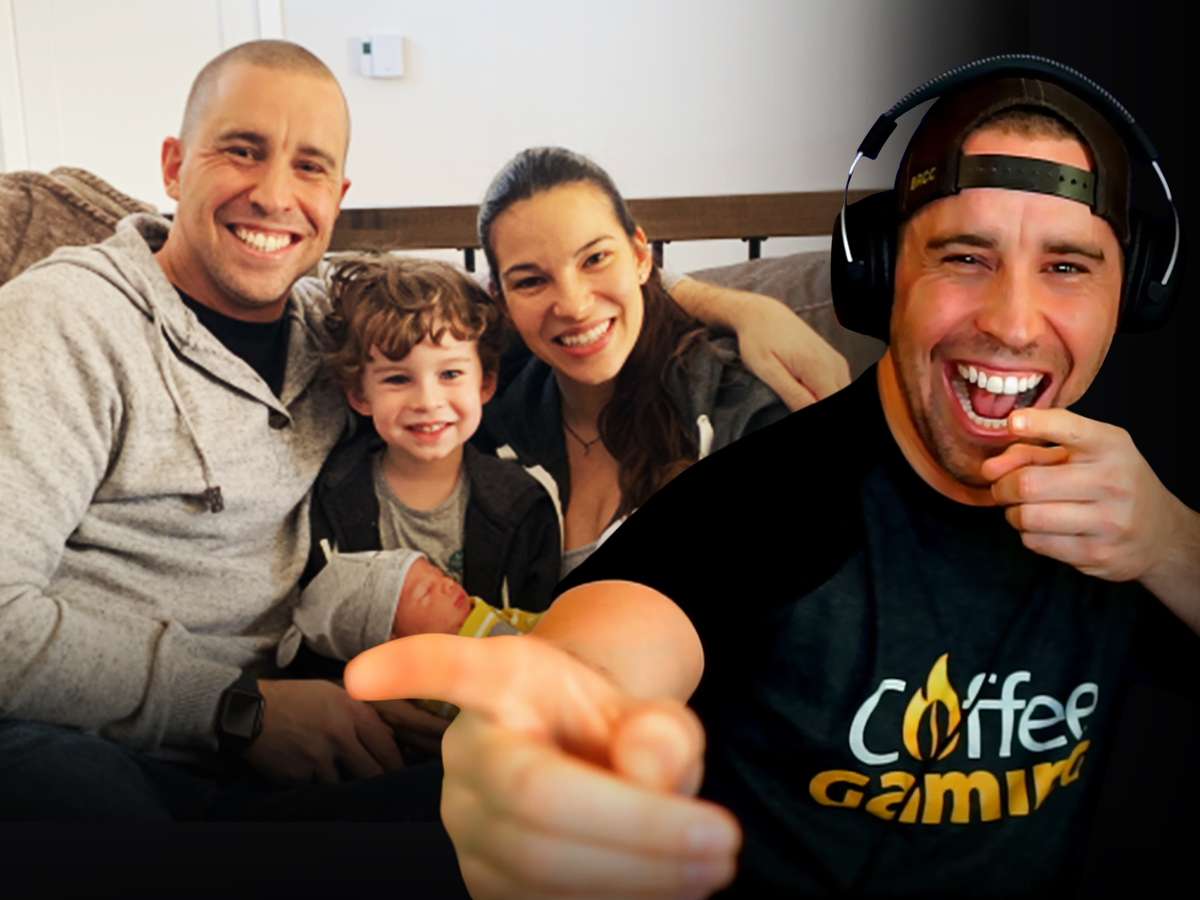 Coffee Gaming shared the story of his journey with us after his brain tumor diagnosis and finding out his wife was expecting their second child last year.

Coffee Gaming is a husband, father,  firefighter, veteran, and Facebook Gaming partner who streams PUBG Mobile. His world was turned upside down last year when he was diagnosed with a brain tumor. They also found out they were expecting their second child around the same time. Coffee Gaming agreed to share the story of his journey over the last year with us.

Something’s not quite right

Coffee was in the grocery store and called his wife. Usually, he would leave his phone on speaker, but it was very noisy this day in the store. So, being left-handed, he put the phone to his left ear and was confused as he couldn’t hear his wife speaking. At first, he thought it was the phones, either his or his wife’s, there must be something wrong with them, he could hardly hear anything. But when he put the phone to his right ear, he could hear perfectly and realized that something was wrong with his left ear.

Not realizing it before, it suddenly became clear that he had lost hearing in his left ear. When people spoke on his left side, he would unconsciously turn to his right side to hear them. It became even more apparent when his three-year-old son called him, and he couldn’t hear him, even though he was close, but on the left side of him. So he then decided to go to the doctor.

He went for an MRI, magnetic resonance imaging, saw an Ear, Nose, and Throat specialist, and got some more tests done. After he went to the doctor, he started to notice more things not quite right. The left side of his face started tingling and feeling numb. His sense of taste went away, and he could tell how things should taste, but it did not. Eventually, the whole left side of his face was not operating the way it was supposed to.

While waiting for the test results to come in, Coffee, like anyone else would, took to Google to self-diagnose his symptoms. Panicking but also not panicking, he was anxious to find out what all his symptoms meant. He finally asked the doctor if there was a chance that it was a brain tumor because he was pretty sure at that time that was what it was. She told him they have to wait for the results to come in but that maybe he is on to something.

Baby on the Way

Coffee and his wife found out they were expecting their second boy around this time too. It was hard. He was excited but also scared. Scared that he might not be there for his new baby boy, he played out all the bad scenarios in his mind. He prepared himself and decided to expect the worst but hope for the best and that it didn’t matter what the outcome was. All that matters is that he is there with his family. Everything will be alright.

“The doctor called me with the results of the tests. She asked me to sit down,  and at that point, when your doctor tells you to sit down, you just know it is going to be bad news.”  – Coffee Gaming

Two weeks later, the doctor called him with the results. It was scary, but when he finally had the official results, he felt relieved. The doctor was surprised. Coffee was the first patient who ever expressed relief at hearing he had a brain tumor even though it was not cancerous. He allowed himself 15 minutes to mourn and feel sorry for himself. Coffee is a positive and proactive person, and he then started preparing himself mentally for what lay ahead.

“I was relieved. As weird as it sounds, it could have been a lot worse than what I thought it was.” – Coffee Gaming

The neurosurgeon gave Coffee two options. The size of the tumor was borderline, and he could either get traditional surgery or Gamma Knife Radiosurgery. Gamma Knife radiosurgery is a type of radiation therapy used to treat tumors, vascular malformations, and other abnormalities in the brain. It is not surgery in the traditional sense because there is no incision.

“We’re gonna climb this mountain. I saw the mountain, and it’s a high one. It’s gonna be a tough, tough, tough climb, but it’s done, I cried. Now we’re good to go, and we’re gonna start walking.” – Coffee Gaming

Three months later, it was time for the surgery. Of all the surgeries Coffee had in his life, this was the scariest and craziest one of them all. His head was bolted to a frame by four people, all while strapped to a machine and conscious. The pain was excruciating, and he thought he would pass out. Even the neurosurgeon thought they might lose him when all his vitals dropped due to his reaction to the pain. It felt as if the morphine he received before the procedure started did not kick in at all.

“I felt like in the movie Saw, that’s how it was. It was pretty bad. People are tightening the screws at the same time, and it actually punctures your skin and skull.”  – Coffee Gaming

Coffee spent the whole day bolted to the frame. He went into surgery and was under the Gamma Knife for about an hour. He went home on the same day, even though the frame had to stay in place for a while. His face was numb, and he lost hearing entirely in his left ear.

The most brutal blow, however, was vertigo. One of the effects of the tumor was the loss of balance, and it played a massive part in Coffee not being able to perform his job as a firefighter anymore. Time will tell if he can go back to firefighting, but it is on hold for now. Not only did he lose his income and a way to provide for his family, but he couldn’t do what he loved most anymore. Helping people as a firefighter was an integral part of who he is. Fortunately, Coffee was always passionate about streaming. Even though he was afraid that he might not stay relevant as a streamer, he decided to stream and focus more on his community.

“At the same time, it came down to like hey, why am I a content creator? What am I, why am I a streamer, is it to show off, or is it to build a community, have a good time, and help people?” – Coffee Gaming

Playing a first-person shooter game, like PUBG mobile, was hard after losing his hearing because 90% of the time, you locate the enemy through sound. Coffee realized that his community was not necessarily there to watch how “great” he was at the game but rather to escape from their daily routines and have some fun with him on stream. He now uses the mini-map to locate the enemy.  It was tough adjusting his game plan, but it is working well for him currently, and he feels his gameplay has improved again.

“My streaming community is my second family, and I did not hide anything regarding the tumor from them. The support was amazing. Streamers and communities had my back 100% and made sure I could provide for my family.” – Coffee Gaming

The big step with taking on more streaming enabled Coffee to provide for his family, even if it took some time to readjust. Fellow streamers and the community rallied behind him, and the support was and still is impressive. Coffee was transparent from the start, and his community was with him every step of the way. Even though he did not discuss the financial aspect with them, several streamers held fundraising events and donated the proceeds to him for medical and living expenses. He feels super blessed and will someday do the same for someone else in need.

Coffee is still adjusting to life after the surgery. He went for two scans since the surgery and still has to get scans every six months. The first scan showed no improvement on the tumor, but that was due to the inflammation of the surgery. A year after the surgery, the second scan showed that the tumor shrunk by 2.5mm (0.098”). The reduction of the tumor is excellent news, this may not seem like a lot, but the neurosurgeon explained that it is unlikely to grow again once it starts shrinking.

He received some more good news after a hearing test. His hearing has improved and is up from 10% to about 20%. This improvement is very unusual because typically, hearing does not return once the nerves inside the ear are damaged. The numbness in his face is gone. His sense of taste also returned. He still tires easily, and concentrating on something is hard at times. However, if you met him in person for the first time now, you would not know anything was wrong.

Coffee is very humble and down-to-earth. His advice to anyone going through a tough time is to take it one step or task at a time. Appreciate the small things, like having ice cream with a loved one even if you are in a hurry. It is the small things that matter.

“Stay Positive. Focus on the small battles in life, not the war. Looking at the big war might discourage you. Break the war down into small battles and tick them off. Before you realize it, you won the war.” – Coffee Gaming

Coffee is exceptionally grateful for his wife, who stood by him and helped him during this emotional time. He is thankful for his streaming community and friends, who reached out with love and supported him and his family during this trying time.

His dream is to be able to return to firefighting next year. For now, Coffee enjoys streaming, loves his community, and feels blessed to impact someone’s life through gaming.